The October 2016 local elections in Bosnia and Herzegovina were fast approaching when Sanja Jerlagić and Dalio Sijah arrived in Tbilisi to participate in TechCamp Georgia. Jerlagić and Sijah, journalists at Radiosarajevo.ba and UG “Zašto Ne”, respectively, wanted to find ways to remind citizens across the country of the pre-election promises and realistic achievements of political parties at the local level.  “Voters need to better evaluate the activities of political subjects, compare and conclude about the candidates and then make a decision about who to vote for,” Sijah explains. “(Voters) have lost faith that the state or the judiciary system will protect them,” Jerlagić says. “People should get engaged in what the politicians are promising and then (call them out) on the lack of their fulfillment.”

For Jerlagić and Sijah, TechCamp Georgia was a place where they discovered how new options such as Facebook Live, Google mapping, using mobile phones and apps for reporting could transform their journalism, which seeks to get citizens more actively engaged in the voting process. “There is a whole new digital world out there waiting for us to discover and use it with ease,” Jerlagić explains.

“Mapping out the Solution”

After exposure to these tools and techniques at TechCamp , Jerlagić and Sijah decided to take the promises of the 2012 local elections and create a “promise map” to show whether these promises had been fulfilled over the ensuing four years. The team competed for and received a small grant following TechCamp Georgia and used the funding to create six interactive maps, three infographics, 24 multimedia collections of the 2012 pre-election promises, 12 multimedia collections of pre-election promises from 2016, 12 live streams, and 30 articles on their web portal.

To achieve the data behind the promise map, the two conducted interviews with all the main candidates for the chiefs of municipalities in Sarajevo, followed the politicians’ main events and mapped close to 500 of the most interesting promises, drawing data from a platform called Istinomjer (translated as “Truthmeter” in English).  “We wanted to get people more engaged into following the pre-election promises that Truthmeter gathered,” Jerlagić says. Of the 472 mapped promises in the 2012 to 2016 span, they concluded that 227 were fufilled, 96 were partically fufilled, 118 went unfufilled, and the rest were unfounded. Below is an infographic that shows which of the promises they charted as being fulfilled during the four years.  You can also check out the maps of the promises, embedded within a news article here.

When election night finally arrived, the journalists went to the headquarters of the biggest political parties and covered their reactions, including livestreaming on social media, while waiting for the first results. “As a journalist on a news web portal, the most important thing is to get the right information to the readers as quickly as you can,” says Jerlagić.  After the election, the two collected results and made infographics to visualize the results of the voting for majors in six municipalities and municipality Councils in Sarajevo Canton (here). They also created a graphic to showcase showcase the biggest projects announced during the candidacy.

Prepping for the Next Election

Looking toward 2020, the team has already mapped 460 promises from 2016. Sijah explains that all 2016 pre-election promises that are collected will be presented on the Istinomjer web page, with reports and maps showing the status of those promises so voters have the best available information ahead of the 2020 races.

Sijah and Jerlagić attended TechCamp Reconnect in Warsaw in September 2017, working with alumni and trainers from similar TechCamps. At TechCamp Reconnect, the team discovered how to integrate the maps with other technologies like Instagram to make them more interactive to citizens. “TechCamp Reconnect helped us see our project in a new light,” says Jerlagić. “With the help of our trainers, we got a new perspective, some new tools we are excited to use in the second part of the project.”

Looking toward the future, Sijah and Jerlagić are confident that their project will forge a new way forward for holding public officials accountable and increasing trust in government. “The most important goal of this project is to keep municipality mayors accountable (to) what they promised to their citizens, and on the other hand, to remind citizens what their mayors promised to them,” explains Sijah.

“We hope our promise map will continue to be a tool that people can use to get their message to the people in charge,” Jerlagić says. 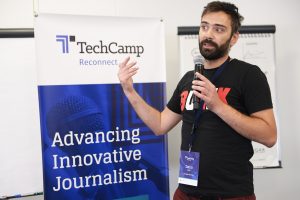 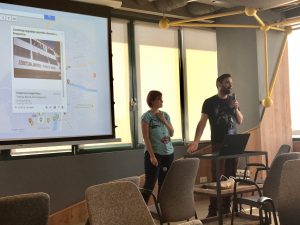 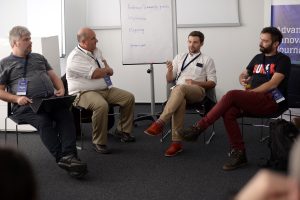