With the onset of COVID-19, women have faced job loss, greater demands in child care, and increased threats of gender violence. Capturing and disseminating stories of women’s lived experience is of the utmost value and importance. When stories are created and shared, people can be both informed and proactive in their communities. Reporting has the power to identify pressing problems, bring visibility to them, and seek solutions. With this in mind, the TechCamp team, U.S. Embassy México City, and Chicas Poderosas created and hosted TechCamp México 2021, an immersive training program for journalists and related media professionals to promote investigative journalism and media freedom. Out of 47 pairs of bright women across México who applied to the TechCamp, 10 pairs were selected representing 8 states: Oaxaca, Colima, CDMX, Chihuahua, Guerrero, State of México, Guanajuato and Baja California Sur. Events were held virtually between August 1, 2020 through September 1, 2021, where the 20 participants engaged in 8 workshops and 12 personalized mentoring sessions. In order to bring pieces to life, participants also received a grant and video production kit to produce their short documentaries. Initiatives such as this create a platform to discuss issues and heroes of the day. From a town chronicler to a midwife collective, the alumnae of TechCamp México 2021 have produced vivid and powerful stories.

Participants Lucero Mercedes Cruz Porras and Sandra Lilia del Rocío Porras Núñez created Aerolito: la voz del pueblo (Aerolito: the voice of the town) which explores the story of Maricruz Lázaro Martínez, the newspaper delivery woman and information chronicler of Nazareno Etla, a town in the Central Valley region of the state of Oaxaca. The authors write, “esta es una carta de amor para todas las mujeres, porque cuando el mundo paró, salieron a darle un poquito de sentido a todos nuestros remolinos” (This is a love letter to all women, because when the world stopped, they came out to give a little meaning to all our eddies). Martínez first began delivering the news by bicycle 21 years ago and has continued to do so regardless of harsh weather, the pandemic, and other dangers. She is seen as a pillar of the community and an important correspondent of their stories. 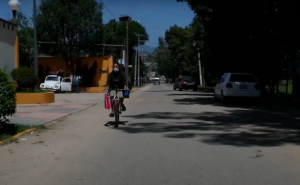 From La Yerbabuena in Colima, México comes the story of Cocina Micaela: sabores y saberes de la resistencia (Micaela Kitchen: flavors and knowledge of resistance). The independent community of La Yerbabuena has faced threats of displacement and dispossession from commercial interests for almost two decades. Creators Evelia Montaño Centeno and Marcela Gómez Gutiérrez depict a family of resistance fighters: grandmother Olga, titular Michaela, and daughter Jhovanna. The three women disrupt the capital plans by continuing to garden, cook, and stay rooted to the land of La Yerbabuena. It is an inspiring story of resilience and independence.

In En punto medio, las ‘nenis’ del norte (In the middle, the ‘nenis’ of the north) Flora Isela Chacón Flores and María Cruz León Pineda introduce ten fabulous female entrepreneurs of all ages operating in Chihuahua, México. The authors write that although some of the businesses began before COVID-19, they are an “el ejemplo de cómo, ante la crisis, las mujeres han demostrado siempre tener el impulso, el coraje y la creatividad para convertir las dificultades en un emprendimiento que les permita salir adelante” (example of how, in the face of crisis, women have always shown that they have the drive, courage and creativity to turn difficulties into an endeavor that allows them to get ahead). In the face of discrimination, belittlement, and harrasment, these women have shown the true power of ingenuity.

Creators Aline Citlali Espinosa Gutierrez and Jessica Patricia Gamiño González investigate the nature, conditions, and statistics of México’s agricultural industry from the perspective of two day laborers, Rocío and Adriana, in Eterna jornada: madres en el campo (Eternal journey: mothers in the field). The individuals work in the State of Guerrero and face grueling conditions. This includes long days in the sun and the need to continue with work, even when pregnant or facing a health emergency. Additionally, unpaid domestic labor falls squarely on their shoulders. Eterna jornada turns the camera on Rocío and Adriana to bring awareness to the injustice they face.

Violence against women is an issue faced around the globe. For some residents of Tultitlán, ending this violence is a personal mission. Mayra Grisel Ángel Sánchez and Yenifar Carina Gómez Madrid document the story of three activists and their work to create a community network for the prevention of partner and family violence . In Mujeres que acompañan a otras mujeres (Women who accompany other women), Ivonne, Flor, and Lupita share their struggles and hopes. The activists have training in criminal and family law, human rights, and feminism and chanel their knowledge into helping women in Tultitlán find resources and take legal action to ensure their health, safety, and wellness. Ivonne, Flor, and Lupita work to make the goals of the 2015 Declaration of Gender Violence for Femicide in the State of México a reality by improving and saving lives in their community. 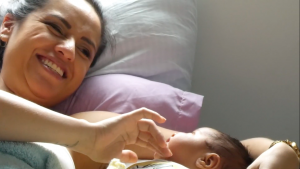 Without a doubt, Covid-19 has rocked the world to its core. In México City, women working in healthcare are on the frontlines of the pandemic and have made enormous sacrifices to care for their fellow citizens. Thousands of service providers in México have made the ultimate sacrifice and have lost their lives to Covid. Sandra Romero Flores and Marisol Sofía Yañez García chronicle these harrowing efforts in Pandemia: las mujeres de la primera línea (Pandemic: women on the front lines). Doctors, nurses, and healthcare staff face a multifaceted struggle of not having proper protective equipment, caring for sick patients, avoiding infection, and bringing dignity to their practice. Over the course of the pandemic, healthcare workers have had to use their own income to purchase protective gear on top of caring for the critically ill. The fight for hygiene and safety in medicine continues.

In Revolución sorora: las buscadoras en Guanajuato (Sorora revolution: the seekers in Guanajuato), María Carmen Pizano López and Edith Domínguez Pérez document the search for missing persons in Guanajuato. Since 2017, violence in Guanajuato has escalated and residents face the threat of kidnapping, extortion, forced disappearence, and murder. For families of disappeared persons, exposure to Covid-19 is not a reason to stop searching. Through organizing and detection, 146 clandestine graves with more than 300 bodies were discovered in four short months. For those who have gained closure, they continue searching to help support those still with missing loved ones. López and Pérez tell this story of pain and perseverance in Revolución sorora.

In Yo decido con amor: acompañadas en el aborto (I decide with love: accompanied in abortion) filmmakers Daniela Pérez Reyes and Victoria Angélica Palacios Pérez delve into the difficult world of abortion in México. During the pandemic, 18 women in Baja California Sur were prosecuted for terminating their pregnancies. Additionally, the monitoring and restriction of the drug used for abortion has signifigantly increased. As a response to the criminalization of abortion, groups such as Las Calafias, Aborto Seguro and Tú Decides BCS have formed in order to provide support and information to women seeking to end a pregnancy. The work is critical to maintaining autonomy, choice, and health for women and those who can gestate.

The results of TechCamp México 2021 are 10 captivating and compelling documentaries that seek to counter violence against women and write a new story of resilience and prosperity.

Find out more about the program and watch the stories here: https://distintaslatitudes.net/video/techcamp-mx-2021

Find out about our trainer backgrounds and program format here: