Air quality and pollution is a topic that affects people everywhere in Nepal, and Valentine’s Day was the perfect time to remember it with a campaign called “Kids Love their Lungs” which came out of a TechCamp in Kathmandu, Nepal.

Rajan Thapa, the leader of the project, is currently a lecturer at Patan Multiple Campus, in the college’s Department of Environmental Science. He has 12 years of experience working with air quality research and activism. Thapa is also personally invested in his work: his two-year-old nephew suffers from pollution-induced asthma for which he must receive daily treatment. Today, Thapa’s work feels more urgent than ever before.

In the spring of 2019, Thapa was working with an air quality NGO called Clean Air Asia when the U.S. Embassy invited him to participate in the upcoming TechCamp Kathmandu. “When I attended the first day, I found it was quite impressive,” Thapa said. “There were people from seven different South Asian countries, most [of them] already engaged in air pollution issues, active on social media, etc.” TechCamp workshops bring together field experts and motivated participants, who work together to create dynamic ideas. Many projects developed in TechCamps go on to become inspiring campaigns with real impact. During his participation, Thapa chose to focus on data visualization and communication, which are important for educating people about the dangers of air pollution.

After the Kathmandu TechCamp concluded, small grants were offered to participants who wanted to continue to combat air pollution. “I designed a two-month campaign called Clean Air For Life: Let Our Students Breathe Clean Air.” Thapa received US $3,470 to support the project, whose goals were to educate students about air pollution’s negative impact and empower them to make a change.

To assist with his campaign, Thapa took on ten volunteers, or “Clean Air Ambassadors.” The volunteers underwent ten days of teambuilding and supplemental education, then were sent to the field. Thapa selected two areas for programming, one rural and one urban, reaching over 700 students in total. The students participated in a two hour program with interactive stations, where they were given the opportunity to ask questions about air pollution and actions they could take themselves.

After the completion of the original Clean Air For Life project, Thapa wanted to hold one final event. “We sat together to review and reflect on the program and decided to have a final demonstration in Kathmandu.”

While the initial plan was to organize an activity in mid-March, Thapa’s team decided to take advantage of the upcoming Valentine’s Day holiday and hold a special event. “The theme for Valentine’s Day was ‘Clean Air For Life: Every Kid Loves Their Lungs.’” The event, held in Kathmandu, opened with a themed painting activity for all children attending, followed immediately by an open forum discussion. The forum included policy-makers, scientists, and a medical doctor. Students were invited to ask questions about the impact of air pollution and what they could do about it.

The Valentine’s Day event was a great success for Thapa’s campaign. Over 1000 people attended and hundreds of students were reached through each part of the campaign. Thapa added that social media made a big impact on the campaign’s success.  “We invited our experts formally, but all of the other invitations were sent through social media— it was public. More than 600 people gathered. That means that they care about the issues.”

Although Thapa was encouraged by the public response to Clean Air for Life, he knows there is much more that must be done to push the government to take action. “We need to reach out to all provinces and all government officials. We need to expand our campaign.”

This year, Thapa’s students at Patan Multiple Campus are his ambassadors, and with them he plans to hold a similar event next year. “I will mobilize the students to expand this kind of campaign and make people aware of air pollution,” Thapa says.

Thapa believes that the government must take action quickly to mitigate the effects of air pollution, which is a seasonal but recurring problem. However, the public can easily lose sight of the problem when heavy winter rains wash away much of the smog. “In my opinion,” says Thapa, “The government has to come up with a very focused action plan in the next two to three months.”

As a dedicated advocate and lecturer, Thapa doesn’t plan to stop working to build awareness and reduce air pollution in Nepal. He looks to continue building on his extensive experience in the field with his following campaign, using new technology and data mapping to support these endeavors. Looking toward the future, he says, “The government and society will have to work together and have collaboration so that we can control air pollution within a certain time frame.” 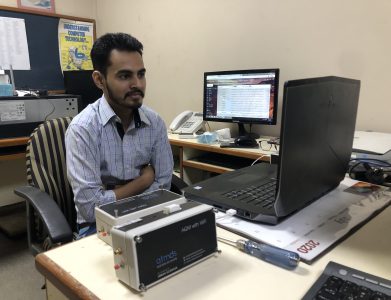