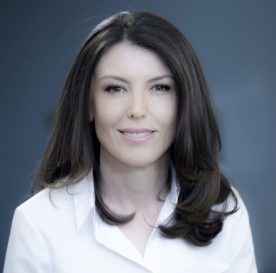 Serbeze Haxhiaj is an investigative journalist and news editor based in Pristina, Kosovo, who focuses on corruption, human rights, security issues, religious extremism, terrorism, and war crimes. She is currently an editor at Radio Television of Kosovo and a journalist at the Balkan Investigative Reporting Network (BIRN). Haxhiaj previously worked for the daily newspapers Rilindja, Zeri, Lajm and Koha Ditore and was the correspondent in Pristina for Le Courrier des Balkans. She has recently been published in The Financial Times, Der Standard, Neue Zurcher Zeitung, Voice of America, World Politics Review, and Al Jazeera. She also has worked for five years as a researcher for Navanti, an American research, and analysis company. For her reporting on war crimes, organized crime, corruption, human rights, and violence against women, she has received 16 awards from various local and international organizations, including a 2020 EU Award for Investigative Journalism.