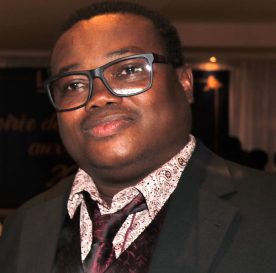 Noël Kokou TADEGNON is a multimedia journalist and teacher and trainer in webjournalist and fact-checking at the University of Lomé. Of Togolese nationality, he has worked in the press for 28 years and is considered to be the pioneer of webjournalism in Togo. This earned him national recognition on March 13, 2021. He was honored at the Togo Digital Awards by receiving the prize for the Great Digital Actors in Togo. Already in 2008, he received international recognition by receiving, in Grahamstown, South Africa, the Highway Africa Prize, intended to reward African actors engaged in the development of information and communication technologies. He was a participant in the World Information Society Summit (WSIS) in Tunis in 2005, the Internet Governance Forum in 2006 and the Web 2 Development Conference in 2007. He was at the origin of the first initiative to fight against fake news in Togo by organizing in the five regions of Togo a national training of community leaders on the dangers of fake news. The project was supported by the United States Embassy in Togo. The following year, he joined forces with two other journalists and a developer to create Togocheck, the only anti-fake news organization in Togo. He regularly conducts media education activities for children and adults in Togo.