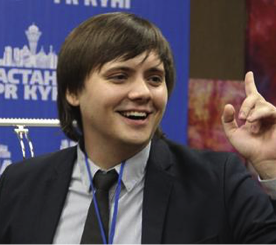 Aleksandr Danilov is co-founder and managing partner of the consulting company «B2C», which is engaged in management, marketing, financial consulting, and managing PR-activities. He is also the head of projects at “Media Consul” Agency. Customers of this company include subsidiaries of JSC National Welfare Fund “Samruk-Kazyna”, the Asian Development Bank, the government of Astana city and many private companies.

Aleksandr represents London-based “Marker agency” in Astana, which is in charge of international public relations and advertising as well as exclusive representation of the biggest world economical media in Kazakhstan. Aleksandr led the press service of LLP “United Chemical Company” and was the deputy director of the department of multimedia technologies in the holding “Nur-Media,” and also oversaw the creation of business media portal “Business Partner.” Aleksandr was president and vice-president of AIESEC Karagandy local committee, the head of the youth NGO “Youth League Ansar,” and co-organizer of the republican youth conference “ZhasCamp-2010.” He is an alumnus of the Moscow School of Political Studies.